French, known as the most beautiful language in the world, is also one of the official languages at the UN, the EU, the IOC, FIFA and other international institutions
France is the world capital of fashion, the arts and food culture, a leading EU nation, as well as a country with an enormous influence on the global arena.
French, the national language of France, is used as one of the official languages in various international institutions including the United Nations. Looking at the global arena, it goes without saying that those who are proficient both in English and French will be of inestimable value.

Our aim is to help students acquire a broad knowledge and understanding of the European region and the Francophone countries, while learning French in a practical way 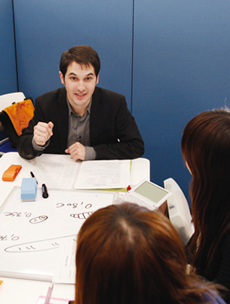 Unlike with the English language, most students come into contact with the French language for the first time when they enter NUFS. In the first year, a Japanese instructor explains grammar simply in Japanese in basic French classes and practical French classes are conducted by native French teachers in French. Through this repetitive cycle of lessons, students will learn the foundations of daily conversational French. From the second year, Power-up Tutorials (PUT), classes begin. PUT classes have a very limited number of students which allows students to develop practical conversational skills on the topics of fashion, the arts, and food culture while imagining themselves in a variety of different settings. Advanced PUT classes, which feature more advanced content, begin in the third year. Furthermore, in addition to the French language, there are classes on the subjects of business and current affairs. The students will learn more practical and specialized French, and continue to develop their skills so as to be able to think logically, hold discussions and give presentations in French. In addition, coming into contact with other cultures through discussions in seminars and studying abroad increases the students' awareness of social problems. A great number of students who study abroad come back to Japan and begin to write a graduation thesis which focus on a deep discussion, for example, about immigration issues, the French economy, show business, the situation in the EU and many other topic which allow students to acquire a broad knowledge and understanding. The students will display a remarkable improvement in writing and composition in Japanese as well.

French major courses in the Department of French

After learning the basics of French, the students will learn the structure and the history of the French Language, and acquire more practical French skills through theoretical studies such as comparing English and French. The students will also learn the essence of French culture, which represents European culture, from not only the perspective of literature and ideology, but also through a wide range of subjects, including journalism.

This is a course intended for students who are interested in acquiring practical French and economic knowledge that will be useful in their future career. After learning the basics of French, the students will acquire advanced French skills they can use in real life by learning specialized French and knowledge required in business.

For more information about the Department of French Studies

The Department of French Studies has their own departmental website. For more information, please visit the website.